Tonight we had our ward Christmas party. It was a packed house but it was a lot of fun. 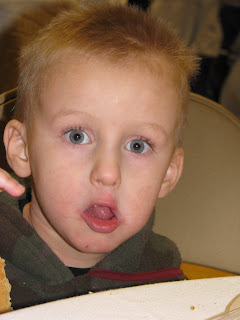 When we first got there Landon was pretty grouchy. We had to wake him up from a nap right before we left and he was not happy. I was worried that we would be in for a long night but his mood got a lot better as the night went on. 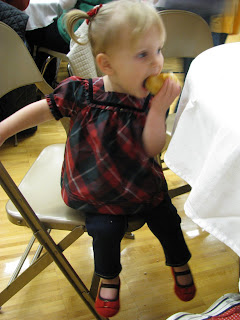 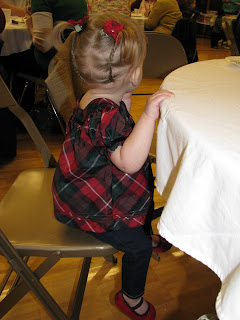 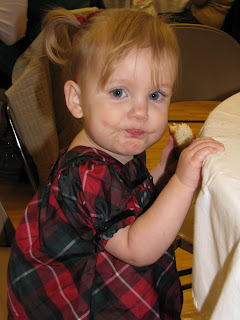 Tori was happy to eat the delicious dinner the ward provided and she looked cute in her festive Christmas outfit. 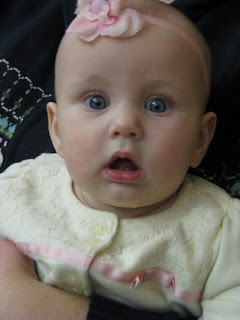 Here is Ella at the party. A family in our ward took and entertained Ella for the majority night. It was really nice to only have to look after 2 kids.
For this years Christmas program our ward decided to have the Primary kids reenact the Nativity. It was so cute! The Nursery kids were assigned to be animals. We have a cow costume that fit Tori but I was stressed about what Landon would be. I finally decided today to put together a sheep costume for him. Now don't laugh at my handy work, I am not a seamstress (in fact I hot glued his costume together because my sewing machine is out of commission), but it worked. 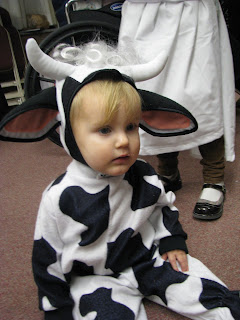 Here is Tori the cow 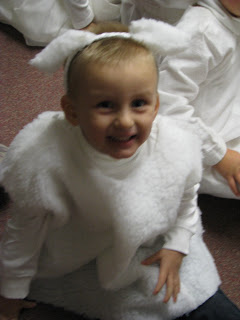 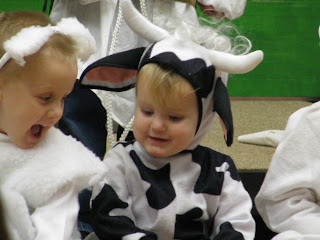 I think they look so cute in this picture.

Landon was so excited to dress up in his costume and be a part of the program. When the primary kids got up on the stage to sing their first song Landon took center stage (I am pretty sure he wasn't supposed to do this) 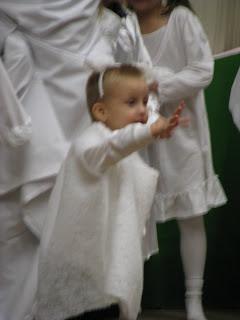 He started waving to everyone and smiling, it was really cute and really funny. But that wasn't the best part. When the Primary kids started singing their song Landon decided that he would put on a show for everyone and he started bustin a move. I was laughing so hard and I wished that I had a video camera. Then it dawned on me that my regular camera takes video so I was able to catch the end of Landon's dancing on video. I am sure there are many a mom who would be mortified if it were their child dancing at a completely inappropriate time but I think it is pretty awesome.

Apparently Landon takes after his Father

SO funny! I'm glad you were able to catch some of it on video. He'll have fun watching that in the future. The kids look so cute. I can't believe how old Landon looks in that first one!

All of your kids are adorable-but I have to make special mention of Tori-her hair and outfit are so adorable, it made me cranky that I have a boy. But then I watched your video of Landon's fabulous dance moves and I'm content again.

That is so funny.

ok. first of the costumes are beautiful cute! and I'm amazed that you threw together the sheep costume at the last minute. awesome.

Landon is a crack up! ha!

Tori looks so cute in the cow costume. I remember when Landon wore that back in the diz-ay!

They are all so cute!!

Landon's hilarious! I love his sweet moves! He's going to be the kid to watch in the primary program next year - that's for sure!

I find it funny in other kids, mine not so much. Ummm, Tori's hair is so cute where you braided it up. I wish you lived by me to show me some cool techniques.

I was totally watching him dance around, but obviously you had a way better view. That is so cute! I love that he kept sliding his "ears" back on. He was the cutest little lamb I have ever seen! And Tori's cow costume was TOO CUTE!

I love it!! I am soooo glad that you were able to get his little dance on camera! Also, Tori looks super cute in her outfit, and I am impressed with your creativity with Landon's sheep costume, I would have never have known you hot glued it!

I have been sick this past weekend so was so excited to see your post, It was so much fun to see the pictures of Landon and Tori and to know they got to take part in the Nativity, it brought tears to my eyes, those are some of my most favorite memories, the primary kids and their performance! I am glad to see that you have such an awesome ward there!