It was bound to happen one of these days,but somehow I figured I could avoid it. I mean I keep all my scissors hidden away and I try to avoid using them when the kids are around. So I wasn't completely shocked by what I saw yesterday afternoon, just mostly.
Before I even knew what happened Landon knew he was in trouble. When I walked into his room he started acting like he does when he knows he did something he was not supposed to do. At that moment I looked down and saw the scissors in Landon's hand. I didn't even have to look over at Tori, I already knew what I'd see, but that didn't keep the tears from welling up when I did look over at her. 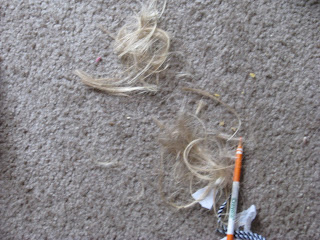 I mean no Mom wants to see a pile of their daughters hair lying on the floor courtesy of their older brother (or any one else who hasn't been given permission to cut). I won't even cut Tori's hair myself so I definitely do not want Landon doing it.
Landon was in big trouble. I sent him to bed for the night then and there (it was 5 in the afternoon). Then I assessed the damage. Big chunks of hair from the middle of the back of Tori's head had been cut. Luckily I found Landon before he got to the front of Tori's head. The pictures below don't really show how bad it was, but believe me it was bad. 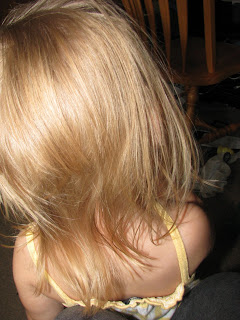 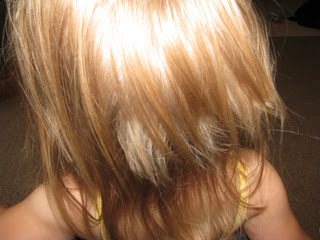 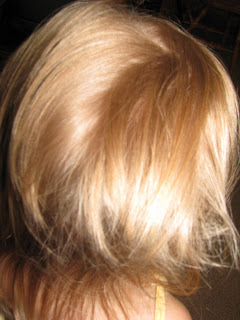 So when Jared got home Tori and I headed to the hair salon. The hair dresser was also shocked at the number Landon did on Tori's hair. It was nice to have someone who agreed with me about the severity of the situation (Jared is a guy, he understood why I was upset, but he didn't think it looked that bad). I told her that I wanted to keep some of the length( meaning I didn't want Tori's haircut to look like a boy's haircut) and that if that wasn't possible I would just leave it the way it was. Luckily the hairdresser was able to work her magic and Tori's hair doesn't look horrible. I am still pretty bummed about all this, and I wish Tori's hair was long again. I know it is just hair and it probably shouldn't be such a big deal to me but it is. Oh well, her hair will grow back eventually, right?
Here are the pictures of her new hair cut.
Front View: 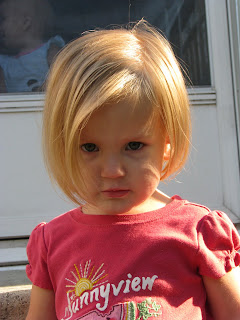 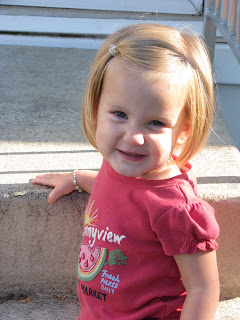 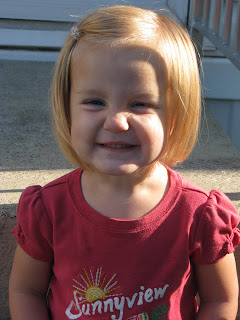 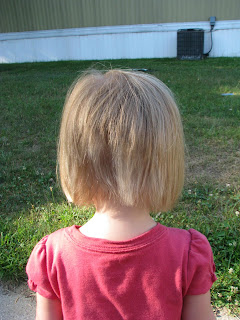 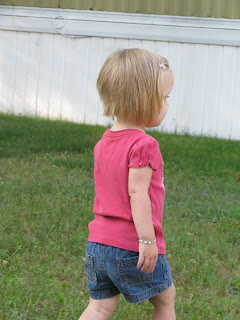 Ugh, stinkin boy!! You handled it well though. She still looks absolutely adorable.

That is sooooo sad, luckily her hair is super cute short too!!! I will buy your four year old, I don't care if he cuts my hair, it could probably use it!!

Ok. her haircut looks super cute even if it was born of necessity. The good news is that it was tori's hair and not Ellas. Tori seems to have a much fuller head of hair to deal with than ella ever has had so of the two girls tori is probably the best candidate for it growing back quickly.

At least Tori didn't cut her own hair and have short bangs like all of me and my girl siblings have done,.. but maybe it's too early to say she won't do that in the future.

I'm sorry pal. I know you just barely took her to get her haircut like a couple months ago. She is still beautiful. And don't worry,..it will grow back quick.

Ok, you know what makes me laugh? That Jessica just posted about this a couple of months ago and you commented on it... Who would have known. I feel your pain and I'm betting good money that my little boy will do that too. It's ok to tear up, you did her long hair so well...

I think her hair cut is adorable! I will also offer to buy Landon. Josie doesn't have any hair yet, and it probably wouldn't be so devistating if the boys cut each other's hair.

Oh my gosh! That is incredible! When I was a kid, I got caught chopping off my own hair, but ... it was my own hair. That would totally make me cry, too. And although I'm sad for you, and I miss Tori's cute hair, her new hair cut is cute:) But like I said, I'M SO SORRY! How sad.

how horrible! this hasn't happened to me but most of my friends and I would absolutely cry to but her new haircut does look cute but seriously tori is adorable so anything would look cute on her :>

We were so sad when we read your FB post however, I must admit she is adorable no matter what!

Wow I love her hair cut, you did an excellent job styling it this morning

She looks adorable! I think every single one of my kids had hair vs. scissors disasters. And it's always terrible at first--then you're relieved everyone still has their eyes!
Jared, it was fantastic chatting with you on Facebook the other day--what a treat!

This is the third post I've read today having to deal with a child-administered haircut! Something in the air maybe? Weird. Tori looks happy enough with the new 'do. Cut little thing!

"cut little do" was that a typo shayla? or pun intended,.. ;) It's lucky you just finished posting cute pics of Tori with her long hair right before the cut. I was looking at some of those cuties and it's fun to have both to put in her scrapbook. :)

um yeah, "cute little thing" is what I thought I had typed... I'm not that corny. I hope.

WoE! Tori is a model! She poses really well for a two year old!