Last Tuesday Landon graduated from Preschool. Before I had kids things like Preschool and Kindergarten graduation seemed so silly to me, but now that I am a mother I totally see the merit in these celebrations. Landon was so excited for graduation day. He, along with the other kids in his class, had spent a long time putting together a cute little graduation program full of cute little songs and skits. I got most of the songs on video but I figure you all probably aren't as interested in those as Jared and I are. Here are some pictures from Landon's big day. 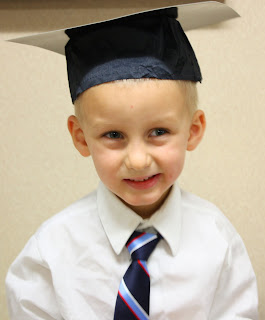 All dressed up and ready to graduate! 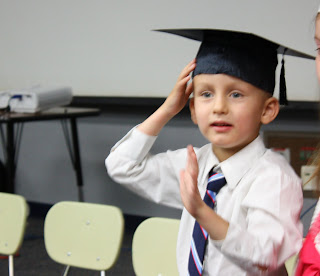 Waving to his adoring fans. 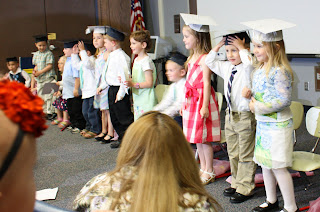 Landon with the rest of his graduating class. Landon has been in school with most of these kids for the past two years. It is a little sad that they won't all be together next year in Kindergarten. 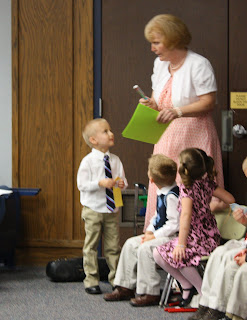 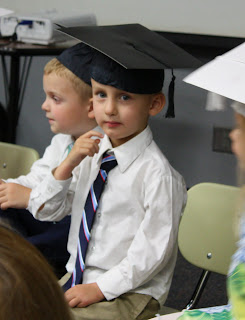 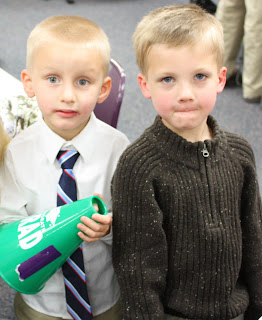 Landon and his best friend! 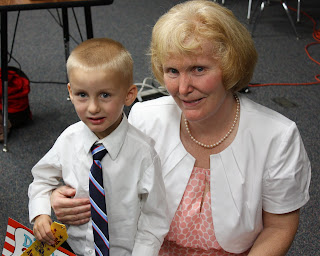 Landon with his teacher Miss Debbie. Miss Debbie is probably the most awesome Preschool teacher ever! It was so comforting to know that when I sent Landon to school he was being watched over by someone who loved him like he was their own. It honestly makes me a little sad to think that we will move before all of our kids have the opportunity to attend Preschool with Miss Debbie, we love her that much. 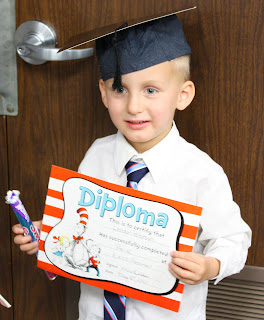 Landon with his diploma, next stop Kindergarten!!
It seems like for most of Landon's life I have been anxiously looking forward to the next big stage of his life, but now that he is getting ready to start "big kid school" it seems like time has flown by way too fast. I am so thankful for Landon and I am so proud of the person he is becoming.
Posted by Kerstin at 9:30 PM

HOLY SHOES! Landon is starting Kindiegarden in a couple months?! WTF?! (What the frank?!)

Tell him to steer clear of under the slides. He doesn't want to get plagued with the coodies man!

Congrats Landon!!!! He is growing sooooo fast!!! Oh, and I believe I would like to see some videos

What a bitter sweet time :)
Hey Kerstin, how are you in these last weeks/days of pregnancy?! I'm just two weeks behind you, but man, I'm ready!

june 2nd,..!! yay. you're moving? to where? I thought you were just moving apartments. when? Congratulations Landon you look so cute!

Theresa we aren't planning on moving soon, but I sure hop that Jared is done with school before Levi is old enough to start Preschool.