It is fun to hear what other people have to say about who they think my kids look like. Ever since I had Ella I have heard a lot of opinions about who she looks like. It is funny because people usually don't give there opinion in reference to Jared or I but instead they reference Landon or Tori. It seems as though 50% of the people I talk to think that Ella looks just like Landon and the other 50% think that Ella looks just like Tori. So today I was a little bored and decided to browse through pictures of Landon and Tori from when they were around Ella's age. Here are some of the pictures I found:
For a reference here is a picture of Ella from last month 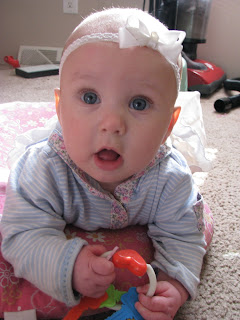 Landon at round 6 months 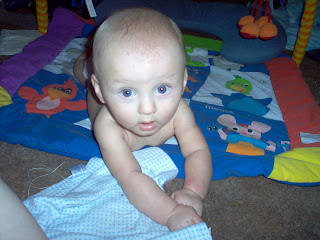 Tori at around 7 months 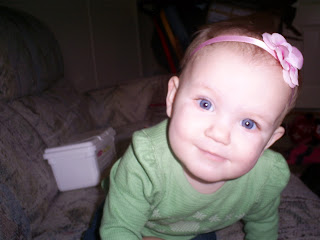 Now I don't know about the rest of you but I think that Ella looks much more like Landon then she does Tori. I think a big part of this is that they have a lot of the same facial expressions. Also Ella is super bald, just like Landon was when he was her age. It is so fun seeing the similarities and differences in my children as they grow.
Posted by Kerstin at 4:18 PM

It also looks like Tori managed to get a different face shape than landon or ella. I think I compared them to Shean most recently,.. haha. ok who knows.

oh yeah just like Landon but you can see a little bit of tori around the eyes. what beautiful kiddos you have :>

In those pictures I don't think they look at all alike except maybe their eyes, but if I were to say which looked more like the other I'd have to agree with you. Hey did you get your package yet?

Ha! That picture of Landon takes me back!!! I think that Ella looks a lot like Landon, but maybe it's because they really do have the same facial expressions. Either way though, whether she looks like Landon or Tori, you can't go wrong!!

Oh man, they are really the cutest kids! That picture of Landon is incredible! That face is so stinkin cute!

Um...I think they all look very different from each other which is wonderful! You have three separate beautiful kids!

All I know is that Landon is a mini-Jared. You might be in trouble if he acts just like Jared....Kyle has told me stories. Ella is a mix, in my opinion, and very cute!!