Sunday night during dinner Landon started whining and rubbing his face and within a few minutes his face was really red and blotchy. We gave him some Claratin and he was fine, but his allergic reaction reminded me of an incident that happened last January. Looking back at the pictures from last year this reaction wasn't nearly as bad, but Landon's allergies and eczema sure do make me sad sometimes. 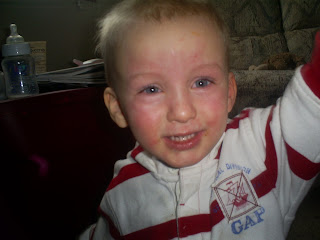 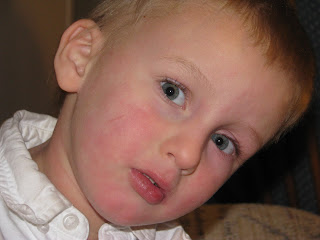 This year.It was worse in real life then it appears in the picture.
On a totally unrelated topic my nephew Clayton got a really cool Batcave for Christmas. Ever since Landon saw Clayton's Christmas pictures he has been talking about that "Bat Castle." Then he saw it at Target when we went there on his birthday. Sometime last week Landon came up to me and said "I want my Batman Castle" and he kept bringing it up ALL THE TIME. So I decided that with the money my Dad sent Landon for his birthday I would get Landon the Batman Castle. Landon loves it and so does his sisters ;). So thanks Clayton! 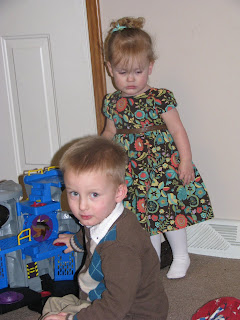 Landon playing with the Batcave. 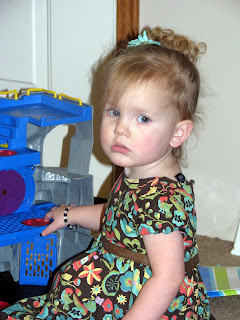 Tori and the Batcave. Her hair looked really cute on Sunday.
Posted by Kerstin at 12:17 PM

Yikes. Do you know what causes Landon to have those reactions? No fun. I still have to lather Aquaphor all over Brighton after his baths because of his eczema. And he goes in for an allergy test next month cause he breaks out sometimes too. But he's never had it all over his face like that. Poor kid!

I love Tori's Sunday dress it's so pretty. Poor Landon. :(

did you get the batman castle at target on sale?

Shayla, we don't know for sure what causes the allergic reatcion but we suspect the feather mattress on our bed, you'll have to let us know what you find out at Brighton's appointment.
Theresa unfortunatly the Batcave was not a sale item :(

Landon's allergies make me feel so sad. I just remember how itchy he would be. It's good though that it's not as bad as last year. Maybe he's growing out of it.

That bat cave is such a fun toy! I'm glad that Landon likes it so much. We are still having tons of fun with it around here (although recently it has made the transition from a bat cave to a really cool hot wheels garage).

Poor Landon! It's probably due to cute-overload every time he looks at his adorable sisters.

Tori looks adorable with her hair like that! I knew he would love the cave, I am so glad that he got it!

Sad, that everyone is so sick, I hope it all passes soon!! And, might I say, you do the cuttest girls hair! If I ever have girls they will over at your house for beauty days,I love it!!