We had a fun low key 4th of July this year. We started the day off by going to our ward's 4th of July breakfast. The breakfast was yummy and it was nice to visit with friends in the ward. After the breakfast the kids had a little bike "parade." Landon had a great time riding his bike around with all the other kids in the ward. 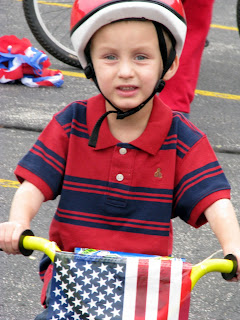 I had planned on making the girls 4th of July skirts months ago but I put of making them until the night before. I was up way too late making them but I think they turned out really cute. You can't really tell in the pictures but the red layer has little white polka dots. 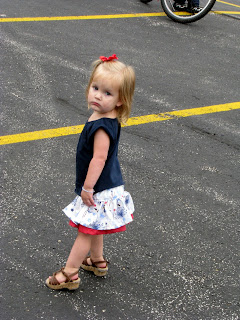 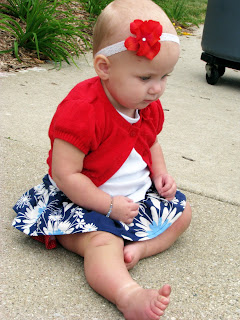 Landon refused to be in the picture with Jared and the girls. 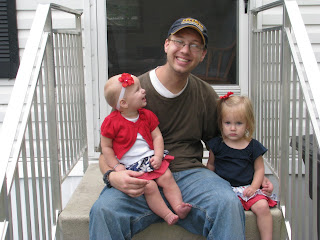 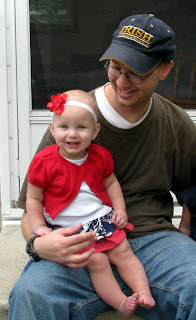 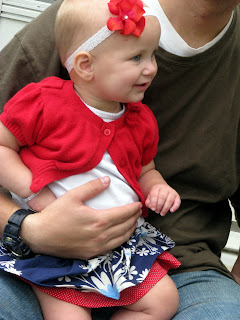 We decided to forgo the firework shows this year. Nothing started until after 10 PM and I figured a fun night of fire works would not be worth grumpy kids in the morning. So instead we lit some sparklers and morning glories. Landon and Tori loved playing with the sparklers and Ella loved watching. 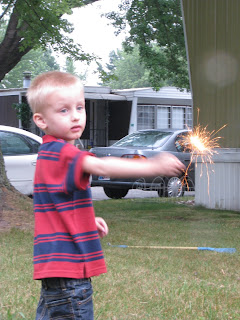 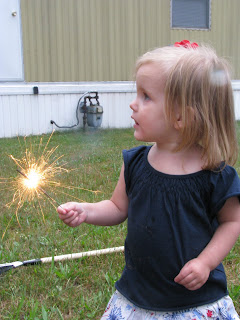 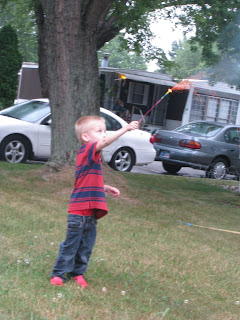 While Ella sat on the grass watching the older kids, she decided to stand herself up from the middle of the ground for the first time! Every time she would fall down she would just stand right back up and start walking around. She isn't full on walking yet but she is getting closer everyday. My baby is growing up. 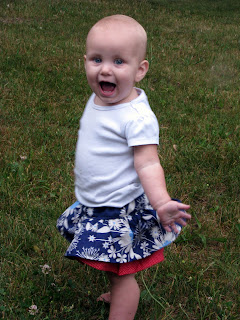 ahhhh so so cute! I love,.love,.. Love! the skirts,... I had an uneventful 4th it was fun to see your mom and darin and dan's family but I didn't take any pics. :) chalk it up to just enjoying this year.

Awh! That picture of Ella is so cute!!!

That is the cutest picture of Ella at the bottom that is one of those pictures you see in the ads or on commercials, they all are adorable!

The kids look fabulous in thier 4th of July attire. I love red white and blue stuff. Fun day for you guys!

did you make their outfits. They are so cute!

Okay, I was going to write exactly what Theresa did. I still am.

I LOVE LOVE LOVE the skirts! They look fantastic!

I want some for my little girl,.. and it's fun to get quoted on here,.. hahaha.