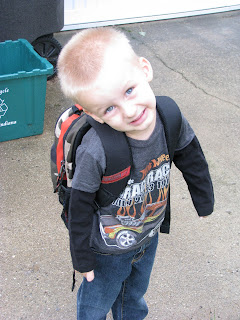 The day has come for my sweet little boy to start preschool. I wasn't going to put him in preschool this year, I was going to wait until next year. But Landon has been talking a lot about going to school lately and I can tell that he is tired of being stuck at home all the time. Still I wasn't going to do it because I didn't think we could afford it. I was talking to my friend at a ward party a few weeks ago and she told me about this preschool right by our house (within walking distance) that was super affordable. To make a longish story short after a kid dropped out I was able to get Landon into this preschool.
Today was Landon's first day and he was so excited to go. It was orientation day so I stayed with Landon and filled out paper work today. Landon will go to preschool Mondays, Wednesdays, and Fridays from 8:15 to 10:30. His first official day is Wednesday. He had so much fun today and he was so sad when it was time to leave.
I can't believe Landon is old enough to start preschool. I know he is only 3 1/2 and maybe I feel this way because Landon is my oldest but preschool seems like such a big deal to me. I guess it just seems like this is the first step of Landon becoming more independent and not needing me as much. I love to watch my children grow and learn and start new things but it is also a little sad at the same time. 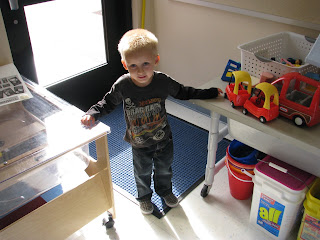 Landon at his Preschool. He had so much fun!

yikes wow. preschool huh? who would have thought. I didn't think he was old enough for school for at least 5 more years,.. hahaha. see how out of it I am. ahhh,.. it makes me feel like he's so old. and he's so cute with his little backpack.

wow...so weird that we're old enough to have preschoolers! So good that he loves school. :)

He looks so cute on his first day! It's hard when they start school. I really didn't realize how big of a helper Clayton was until he wasn't here (yikes). I'm glad that he likes it...it's so much better than the alternative!

That is great that he is starting preschool, he will have so much fun!! He looks so old with his back pack on, I just cant believe how old everyone is getting, it is just crazy!!

i would be feeling the same way, i'm sure. i can't believe he's old enough for preschool! that's great that he's loving it, i'm sure it makes it easier.

Man. :) I can't believe he is already starting Pre-School!!!