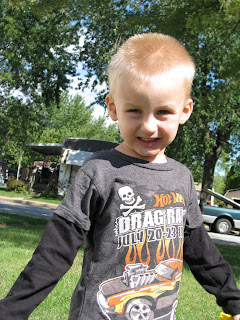 When Landon turned three I was SO excited because I thought it would be the end of the terrible twos. Much to my dismay turning three only seemed to bring more temper tantrums and mischief. I was beginning to wonder if this stage was ever going to end and then it happened. About a month or so ago it seemed as though a magic change came over my boy. It's true the terrible twos (and threes) are finally over! Hallelujah. I don't know exactly when it happened, but it did. Suddenly my son is helpful, polite, and learning new things at a rapid rate. Now don't get me wrong he still has his moments where he makes me want to pull my hair out, and he has long way to go with learning not to torment his little sister (Tori) but overall I am so pleased with the little boy that he is becoming.
I think this all hit me on Sunday. I was in Nursery because Tori would just not behave anywhere else (November can not come soon enough). As I sat there I watched Landon and to my utter delight he was so well behaved. He followed directions, he cleaned up when he was supposed to, he paid attention to the lesson, and sang loudly during singing time. This was not the same boy who I had observed in Nursery only a few short months ago. For once I wasn't worried about how it would be when he had to move up to Sunbeams, I knew he would do just fine. I often get stressed out with being a mother and I sometimes can only see the negative so it is nice to be reminded every once and awhile that I really do have great kids.
Posted by Kerstin at 10:56 PM

Heck did he ever have the terrible twos? I remember coming to visit in Reno and he was soooooo awesome, I remember being in awe at what a good mother you had become....was this really my little girl who hated babysitting all grown up being the perfect mom?

haha he definitly had his terrible twos, and I am not even close to being anywhere near perfect in the mom department

I don't know which mom's you're comparing to KT, but I'm not sure they exist. and I agree.,.. he had a few mild symptoms of the terrible twos whenever I saw him,. (which wasn't much so my opinion doesn't really matter),.. and you handled it amazing and he knew so much about cleaning up and everything. I was always impressed. :)

i meant to say I agree that I didn't see much of the terrible twos in him other than a few mild symptoms,.. i didn't say it right in my first comment.

He is growing up super fast, I cannot believe he is almost four, that is nuts!! You are raising a very polite and well behaved little boy, I noticed that in Vegas, he is also super hillarious, which is a definite plus!!

That is so nice to be past the "terrible two's and three's" stage! Yay Landon!

oh, december can't come soon enough over here. :) I keep telling myself, "it's a good thing I know the church is true, and this is where I should be" because home is just so much more tempting at this stage!